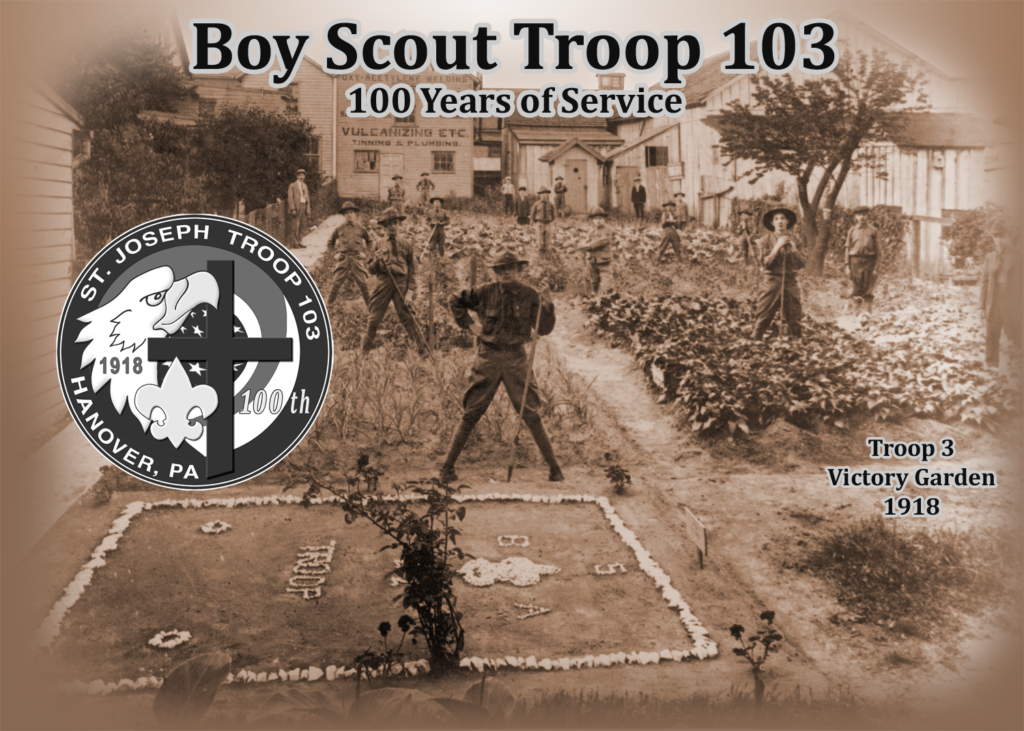 Boy Scout Troop 3, which is now Troop 103 of Hanover, Pennsylvania is shown in the 1918 Victory Garden Photo. The troop just celebrated its 100th anniversary.

The troop was formed in June 1918 in an effort to provide the boys of the local parish (ages 12-18) an opportunity to assist in the war effort, aspire to be in service to others, spend time with nature in the outdoors, and strive as a group to get along and work together toward a common cause.

The evening festivities focused on highlighting the history and tradition of the troop, conveying the troop’s mission with the importance of character development, love of the outdoors, being in service to others, achievement, recognition, and the overall benefits of following the laws and oath of scouting.

The parish’s Holy Name Society, the troop’s sponsoring organization, conjointly celebrated its 95th anniversary of service to the church.

Society Chaplain Jack Krepps gave a rousing talk about his life as a young Scout and how that laid the foundation for his work as an adult and, more importantly, his ongoing devotion to God and to the church.

The parish’s spiritual leaders, Msgr. James Lyon, Fr. Ryan Fisher, Fr. Joseph Gotwalt and Permanent Deacon Tom Aumen attended, as did Fr. Michael Reid II from St. Vincent’s Parish, all there to participate in and celebrate the milestones with both parish organizations.

Scoutmaster Jeffrey Rosenzweig, who is in his 12th year in this leadership role, received special recognition for his outstanding and dedicated tenure, the longest tenure of any scoutmaster in the troop’s history.

Since 2006, he has guided 24 Scouts toward earning the prestigious Eagle award.

1991 Eagle Scout and Holy Name Society member Andrew Lawrence was the keynote speaker who emphasized the importance of abiding by the 12 laws of scouting and living by its oath in being prepared for doing one’s best, in duty to God and country, and seeking ways to be in service to others.

Ron Gardner, Chief Scout Executive of the New Birth of Freedom Council (Adams, Cumberland, Dauphin, Franklin, Perry, and York counties), and York County Judge Todd Platts, former US Congressman, also attended the celebration and provided their respective thoughts about how scouting helps to develop and improve the individual that ultimately in positive ways impacts the local community and society at large.

A display table was arranged with encouraging letters and words of wisdom from several distinguished Eagle Scouts who were unable to join the celebration. Scouting memorabilia from all generations of Troop 103 was one of the highlights for visiting guests.

Each of these four experienced scouters previously received the local District Award of Merit for their distinguished service and all remain very active in the scouting program at St. Joseph.

Crouse is a Silver Beaver recipient. Zinn, an Eagle Scout from 1972, served as master of ceremonies for the anniversary event.

Another special guest who has a vested interest in the troop was John T. Murphy, Troop 103’s third Eagle Scout in 1941.  His grandfather, Thomas Murphy was the first scoutmaster of Troop 103. His dad, Nick Murphy, was one of the first Scouts in the original troop (Troop 3) and later a two-time scoutmaster of Troop 103 and a Silver Beaver Award recipient.  They are both pictured in the Gettysburg Battlefield’s Devils Den photo below.

Murphy said he was impressed with the evening’s festivities and the manner in which the troop continues to operate today.

He shared that he was encouraged by what he sees in the current troop, a troop that began a century ago with his family roots, and one that is ‘alive and well, in very good hands with a bright future ahead.’ 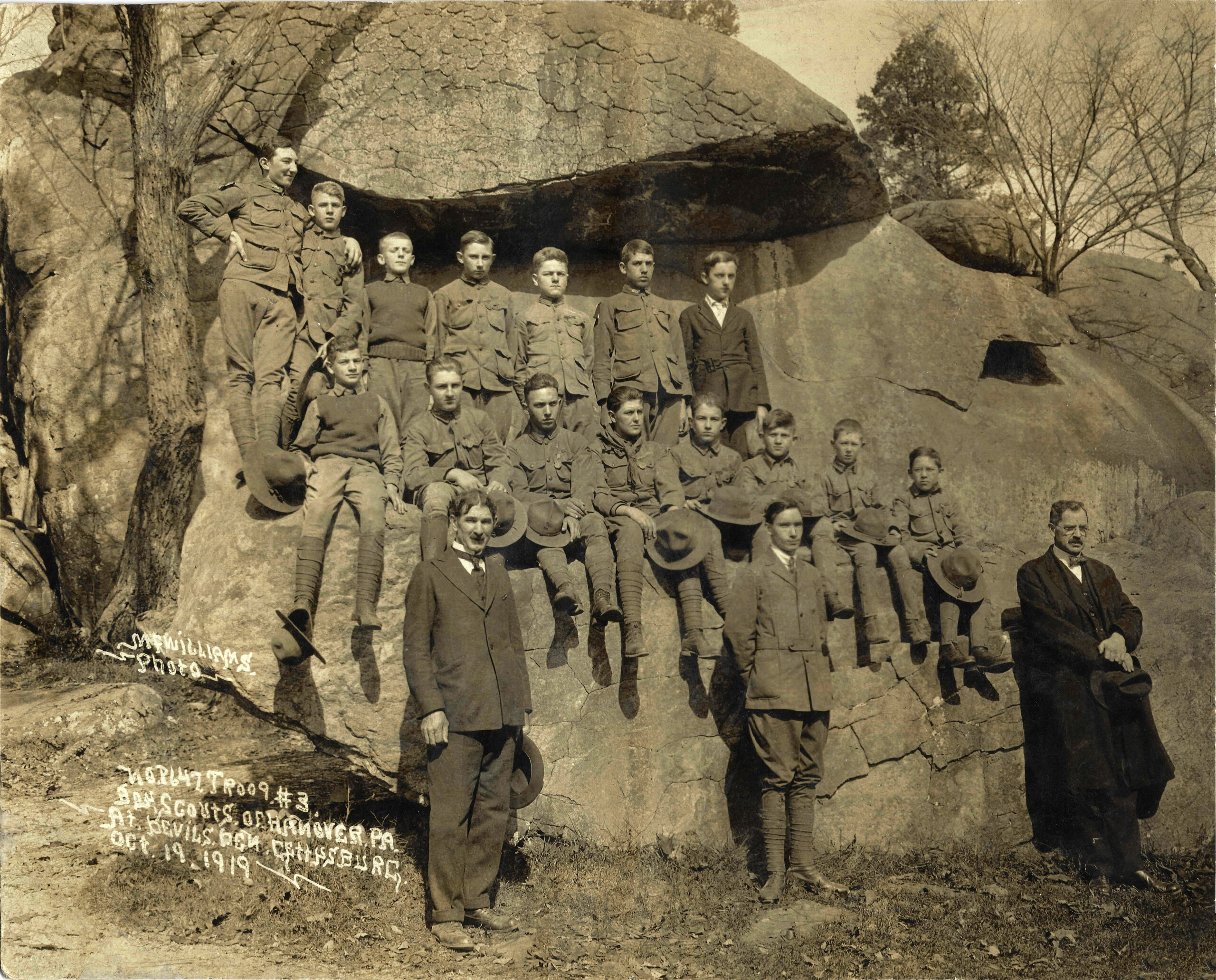 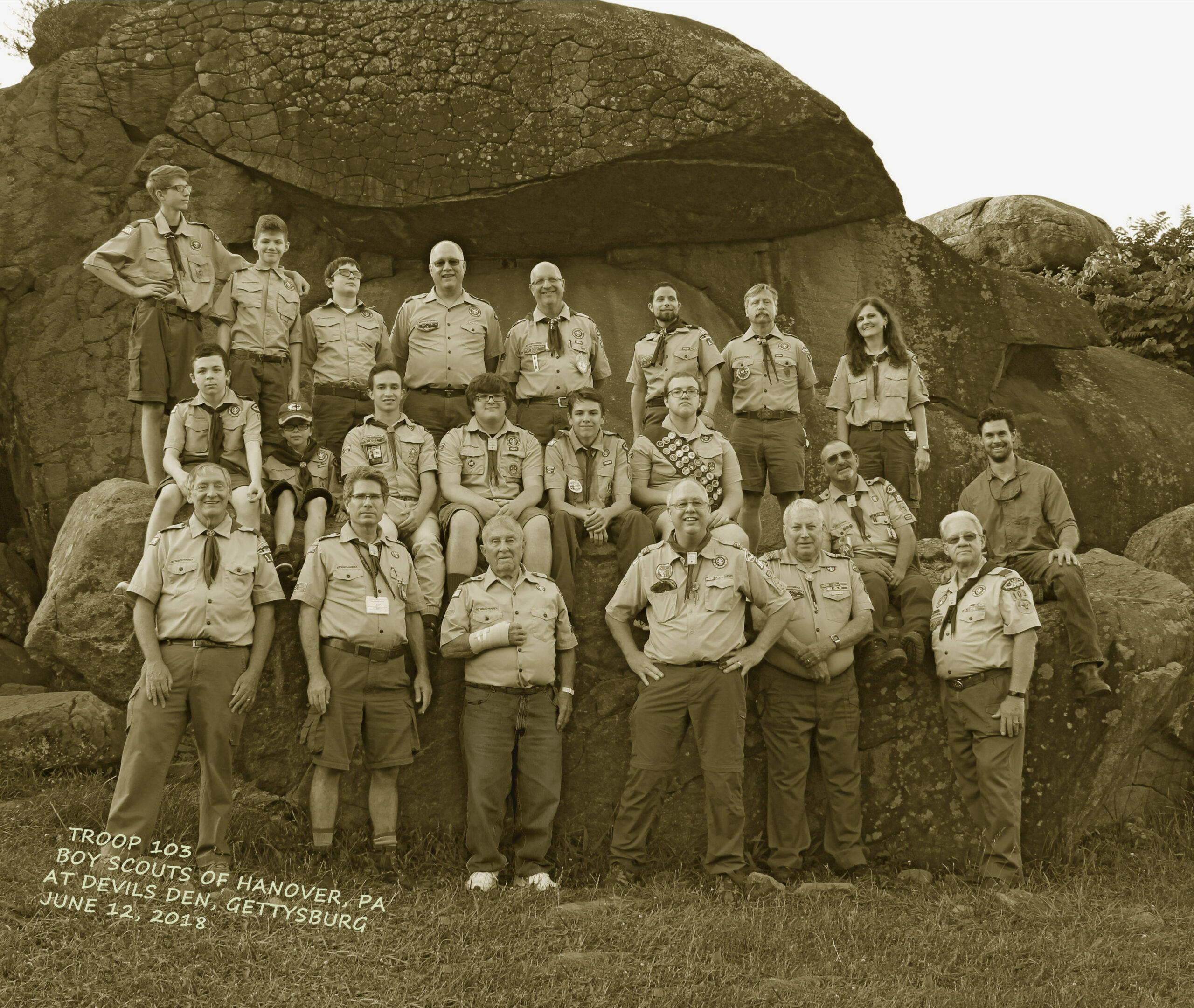 One of the two traditional endeavors undertaken with this anniversary celebration was a trip to Devil’s Den in Gettysburg by the current troop of boys and adult leaders, Murphy, and several other past Eagle Scouts to replicate a troop picture on the same boulders as was done by the original troop back in 1919.

The other tradition the troop has maintained over the years occurs during the conclusion of meetings, scouting events, and at anniversary celebrations. It is known as the “Circle Up” process when all participants stand, cross arms and connect hands with the persons on either side of them. In unison, the group ends the event by proclaiming “May the Great Master of all Scouts be with us until we meet again.”